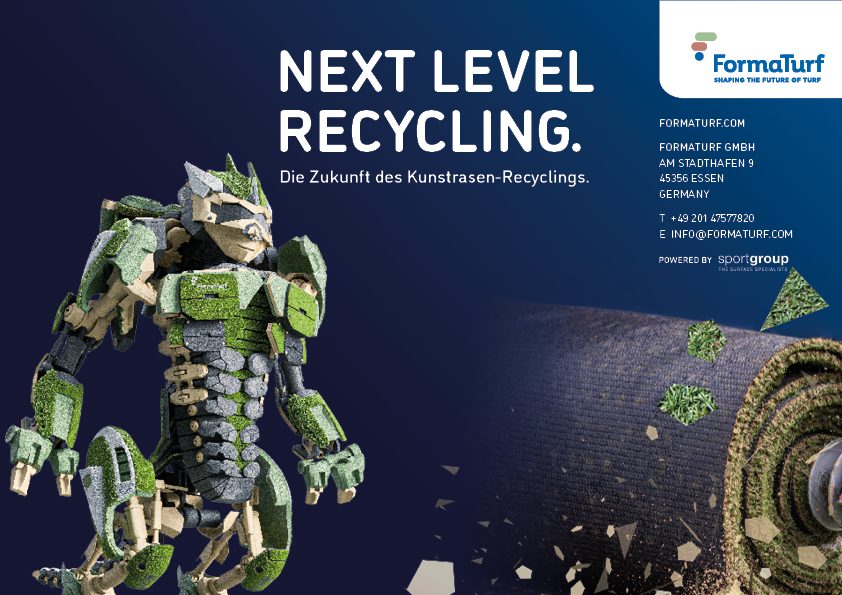 Recycling old artificial turf pitches is one of the biggest challenges facing the sports surface industry in the coming years. The number of pitches that need replacing is growing constantly, and as such, as is the number of pitches that need to be recycled. Up to now, truly sustainable solutions regarding the recycling of old pitches have been a scarcity. But FormaTurf, Sport Group’s newly founded subsidiary, is approaching the challenge of recycling artificial turf systems with an innovative and holistic concept.

The developers at FormaTurf have had their sights set on the entire turf since day one – that means the turf’s backing, the filaments and the infill alike. Everything should be recycled, whether it’s plastic or sand – and that as efficiently as possible. This idea is being put into action at the new plant in Essen, Germany, from 2022. FormaTurf separates the materials and, with the plastics (turf backing, filaments and rubber granules as infill), makes new recycling products such as kerb stones, grass reinforcement grids or flexible modular components that can be used in diverse sectors. The portfolio also includes nailer boards, which will be used again straightaway in artificial turf installation. The sand that makes up approximately 70 percent of an artificial turf’s weight (in total approx. 200 tonnes) is washed and reused for artificial turf pitches or other things. The company thus combines well-known conventional methods with modern recycling methods, and has developed new processes in the field of material recycling. FormaTurf is in a position to recycle mixed materials using high-tech methods to produce new products.

The plant’s flexibility is another plus point. In terms of processing the plastics extracted from the turf into secondary raw materials, the most sensible method in each case is selected to process contaminated old turf. This facilitates recycling that is both particularly economical and low on emissions.

When it comes to the products made from the recycled raw materials, there are plenty of possibilities – including custom solutions. FormaTurf and its approach make it possible for communities to provide their aged artificial pitches with a new purpose within the region. As a result, the recycled material can be actively integrated into new construction projects at the waste’s point of origin and in the vicinity.
FormaTurf’s production location will be in the Ruhr district, as previously mentioned. Germany’s most densely populated region boasts excellent infrastructure. The plant is located in Essen, right on the edge of Essen’s city harbour, and has immediate access to inland shipping and rail routes from there. This means that turf can be transported to the plant as efficiently as possible. But sustainability doesn’t stop at transport: the plant’s energy supply is based entirely on green electricity. Every step of production has been meticulously thought through with regard to conserving energy and resources. Another advantage for the location in Essen is the density of artificial turf pitches in the Rhine-Ruhr region – the highest in Germany, in fact, which corresponds with the highest number of pitches that will need to be recycled in future.

“For us, an artificial turf system at the end of its lifecycle is not waste, but rather a raw material. We recycle the turf in its entirety and make new products out of it, which allows us to avoid waste and create new value,” says Tom Beck, Managing Director of the young company. “What’s more, establishing our recycling plant in Essen means we will close the artificial turf material cycle within the Sport Group. From development and production, to installation and maintenance carried out by German market leader Polytan, as well as removal and complete system recycling, everything comes from the single source of our parent Sport Group.” The old artificial turf is thus reborn.

You can find further information at www.formaturf.com

FormaTurf was founded by Sport Group, a company that specialises in sports surfaces and offers sports surfaces in over 70 countries. Headquartered in Burg-heim, Germany, Sport Group includes Polytan, AstroTurf and Melos. The FormaTurf facility in Essen will provide a state-of-the-art, sustaina-ble recycling solution that meets all German environmental standards.