Opponent in front, wall behind – a spectacle in a glass cage 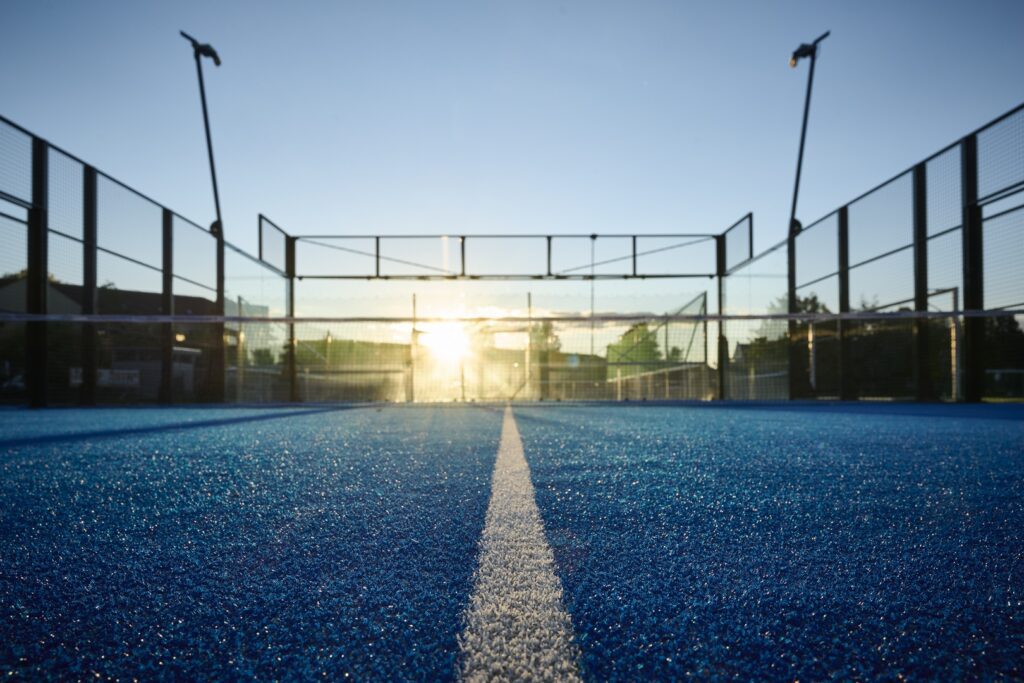 Padel has nothing to do with paddling on water. Rather, the new trend in Germany is a racket sport: a mixture of squash, badminton and tennis (doubles), played by four players on a court enclosed by safety glass and mesh walls, which – like in squash – can be incorporated in the game. Padel is essentially an indoor sport, which is also suitable for outdoors. It gets its name from the former rackets that were used in the game, which were predominantly made of wood and resembled canoe paddles.
At first glance, padel looks like a pocket-sized version of tennis, but despite their similarities, there are also significant differences: the serve is not played overhead in the sense of a “whole body movement”, but played underhand at hip height. At 20 x 10 metres, the playing field is much smaller than a regular tennis court, and the ball cannot go “out”, as it can bounce off the walls and, at worst, get stuck in the net that separates the two halves of the court. The court is surrounded by 3–4-metre walls on all sides. The floor surface of the court is usually made of synthetic turf, sprinkled with fine quartz sand. However, padel can also be played on porous concrete, cement, or other synthetic materials, provided that the surface enables consistent bouncing behaviour and does not collect water. Only the scoring system is the same as in tennis: 15/0, 30/0, 40/0, game, deuce or advantage. Six games are needed to win a set, and at least two sets are needed to win the match.

Like in squash, the ball can bounce of the wall, but may only touch the floor once. Consequently, the ball is constantly in motion, flying to and fro at incredible speed, and there are lots of ball changes in quick succession. For experienced players, this results in relatively long and often spectacular playing sequences. A good feel for the ball is essential. Strength and stamina are less important; rather, the game is decided by ability to read the game, finesse and teamwork. For that reason alone, padel is the ideal sport for keeping fit, both physically and mentally. In short: enormous fun for young and old alike, and a great opportunity to let off steam. And highly addictive too. Another advantage: padel is easy to learn and doesn’t require a great deal of preparation. Anyone who has even a little experience with the ball can jump right in. Beginners are able to play at a relatively high level and challenge even experienced players from early on. There is no need for training sessions like in “real” tennis. The rackets come without strings and, with a maximum length of 20 cm, are shorter, easier to handle and more comparable with beachball rackets. The solid striking surface has a core made of a slightly elastic foam and rubber mixture. To reduce the weight and air resistance, the striking surface has holes in it. The ball is similar to a tennis ball but has less internal pressure, preventing it from bouncing too high. 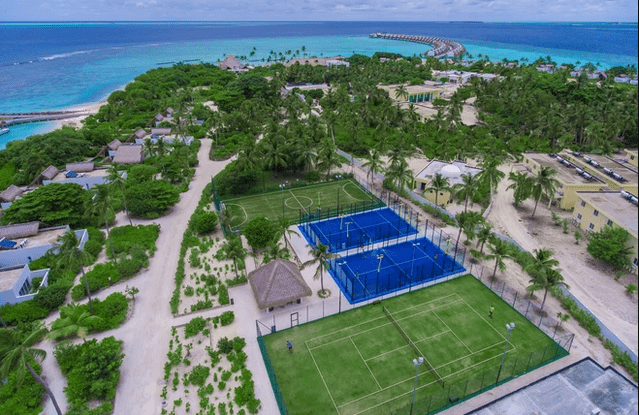 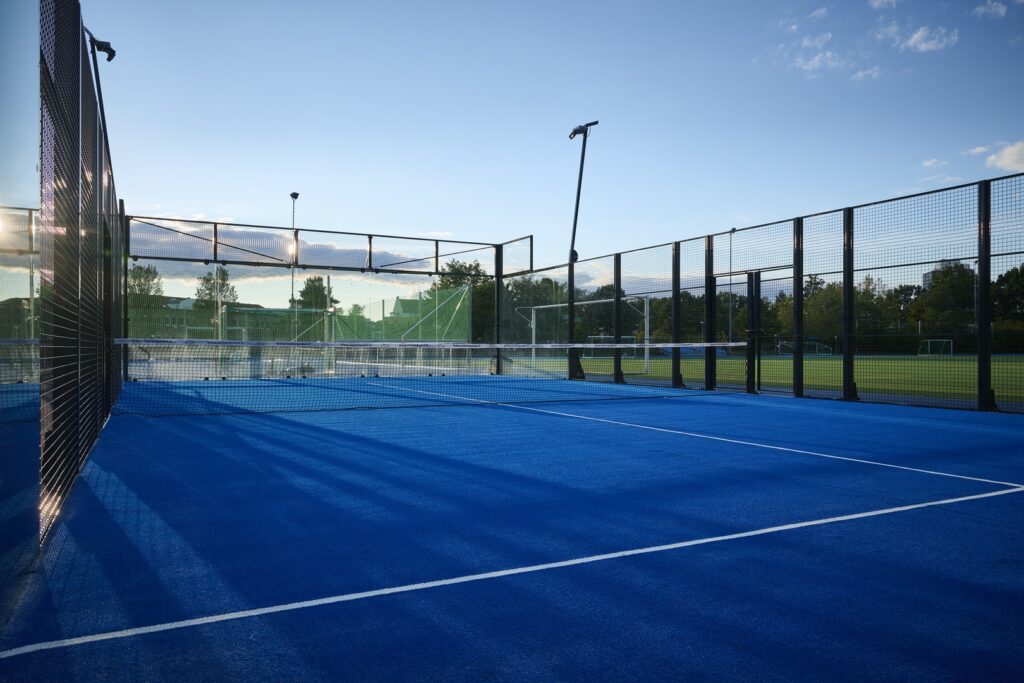 In Spain and Latin America, pádel is one of the most popular sports overall and has long been considered mainstream. Tens of millions of people around the world currently play padel. As a professional sport, padel will be played as an Olympic discipline for the first time in Paris 2024. In Germany, padel is growing in popularity but is essentially still in its infancy. At a national competitive level, the game is played in the German Bundesliga of the German Padel Association – the official champions are FC Weiden and TC Grötzingen for men and women respectively – and there are even two national teams. While Spain enjoys a wealth of padel courts (14,000), in Germany there are only around 70 padel locations (as of 2021). Between them, they have 130 courts, of which 44 are indoors and 86 outdoors. Polytan, the international specialist in sports flooring from Burgheim in Bavaria, wants to change that, and help the world’s fastest-growing sport achieve greater popularity in Germany too. Together with partners, the company is planning complete packages, i.e. padel courts within the scope of the PolyPlay Arena, although the preliminary planning is not yet complete. A facility has already been built in Potsdam, which may serve as the prototype for a subsequent series. If you are interested in a complete package from the German manufacturer, please contact Jan Lauterbach (jan.lauterbach@polytan.com) from Polytan, your expert partner in all things PolyPlay Arena. 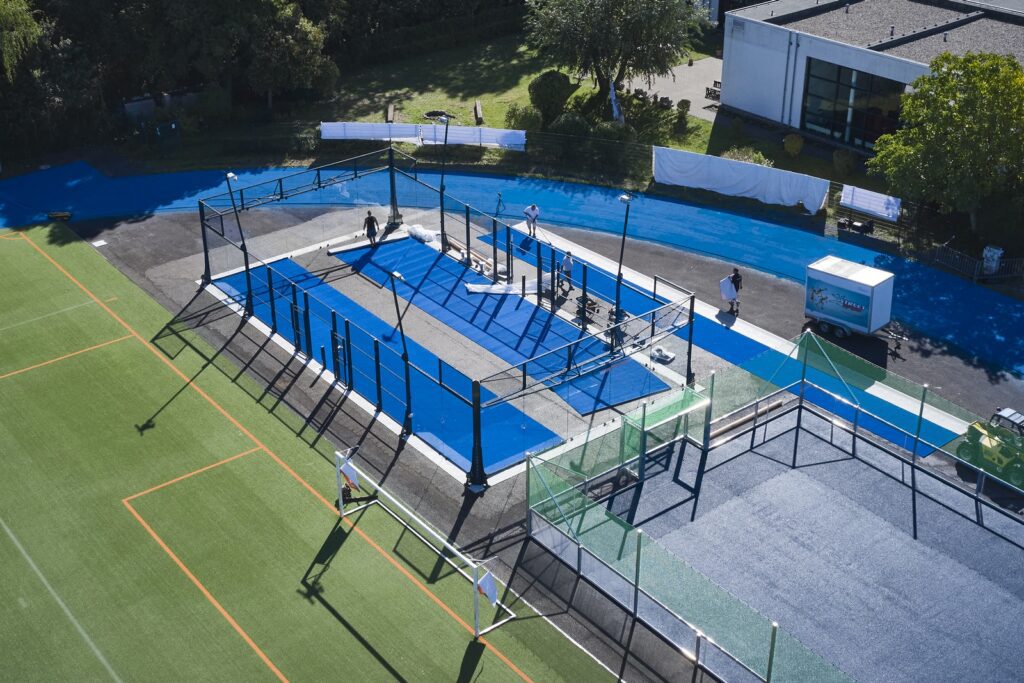 Polytan already has suitable surfaces in its product range. Suitable options include any of our synthetic turf systems that are specially developed for tennis courts or hockey pitches. One particularly suitable example is our partially filled Poligras SuperPlay, which has a soft, pleasant feel and extremely high resistance, reducing the risk of injury. The high filament density ensures a realistic feel, rivalling that of an unfilled pitch. Poligras SuperPlay is available in several colours, enabling a certain degree of creativity in the design of a padel facility. Our turf system Poligras TeamPlay also offers the perfect substrate for padel, as it facilitates a fast-paced, precise game with its extremely thick and uniform multidirectional surface. Polytan’s specially developed PreciTex technology guarantees exceptional turf volume and extreme durability. Despite its robustness, Poligras TeamPlay provides a soft playing surface that not only feels pleasant, but also reduces the risk of injury among players. Thanks to Polytan CoolPlus technology, the turf does not overheat, which ensures a cooler temperature on the court in strong sunlight and reduces water consumption.

Around 40 of the 70 facilities in Germany are currently run by tennis clubs. Until recently, installing a padel facility involved making complex decisions. However, with professional, reputable support, padel can be realised cost-effectively in the long term. A padel court costs between 20,000 and 60,000 euros, depending on the provider. In addition, groundwork is needed to ensure a suitable, frost-proof foundation. The cost depends on the location, but is usually between 15,000 and 25,000 euros. Extra securities in the execution of an outdoor playing facility enable a roof construction, the cost of which will vary depending on the design. In addition, outdoor padel courts are usually equipped with floodlights, allowing longer playing hours in the evening. In total, operators can expect to spend 100,000 euros (net) on an outdoor facility. However, the cost of building and maintaining a facility are still lower than for other sports.

Alongside various funding and financing concepts, the most relevant sources of refinancing are the membership fee and classic court rental. Each tennis court has room for at least two or even three padel courts, which are always occupied by four players, providing greater profitability for the organisation. If, after the renovation, there is empty space left over, this can be used for a training wall or a single padel court. Entry fees for tournaments or other competitive formats, training sessions, courses, sales of materials and sponsoring are other options for generating profit. Based on conservative estimates, refinancing of a padel facility is possible within six to eight years. The German Padel Association provides example business plans on its website: https://www.dpv-padel.de/business-plan/ 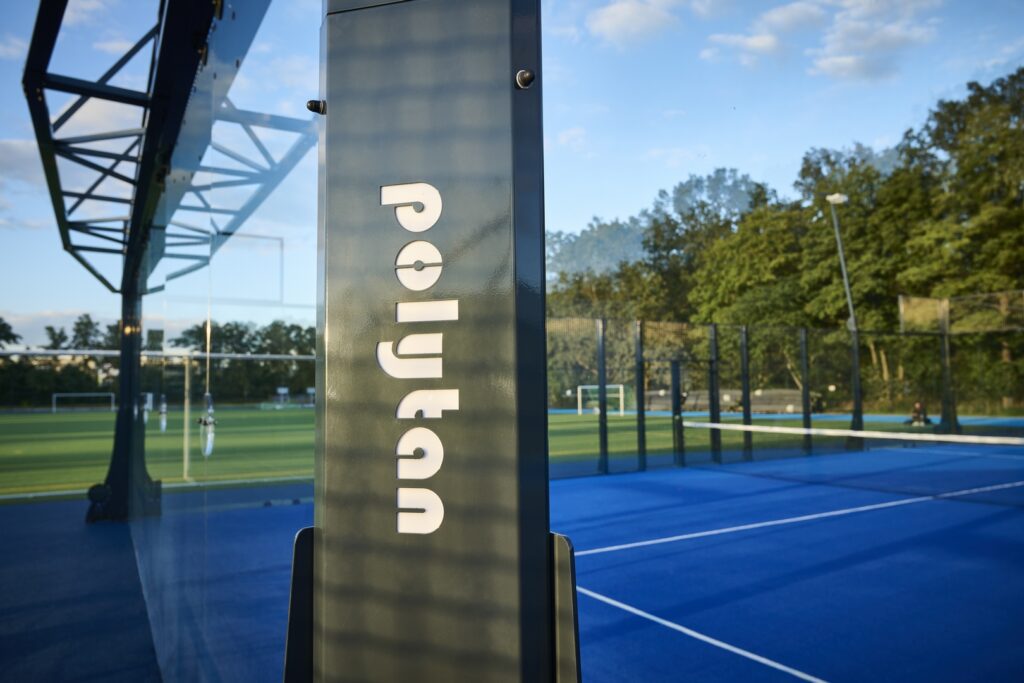 In Germany, a padel court is considered a physical structure (in accordance with § 1 Para. 3 of the Construction Site Ordinance BaustellV). German construction law imposes restrictions on the construction of facilities that non-German service providers may be unfamiliar with, leading to subsequent additional costs. On the whole, it is important to receive professional, expert advice from an architect or civil engineer, if this cannot be provided by the construction company.

Benefits for the operators of padel facilities

Padel is usually met with great enthusiasm by sport lovers, and can thus help grow the membership or inject new life into a club. The only stumbling block is its obscurity, at least in Germany. In this regard, effective communication and activation work is needed to get a padel club up and running quickly, and ensure its long-term success. It is certainly helpful for celebrities and influencers to promote padel.
Andra ämnen, Blog
Ladda ner bilder
Printa

After looking at bio-based raw materials as the basis for Green Technology in the first part of our blog series on sustainability and environmental awareness at Polytan, we are now turning our attention to recycled plastics. We return these materials to the plastic cycle and incorporate them into selected synthetic turf systems in the form […]
Read More »

“WE MAKE SPORT. GREENER.” – Sustainability and environmental awareness at Polytan

In our advertising, we resolutely proclaim: “WE MAKE SPORT. GREENER.” We can use good arguments to support the fact that the tagline is not just a brash slogan. After all, sustainability and environmental compatibility have always been high priorities at Polytan. How are we positioned? Since 1969, the name “Polytan” has been synonymous with artificial […]
Read More »