50 years of sports history with Polytan 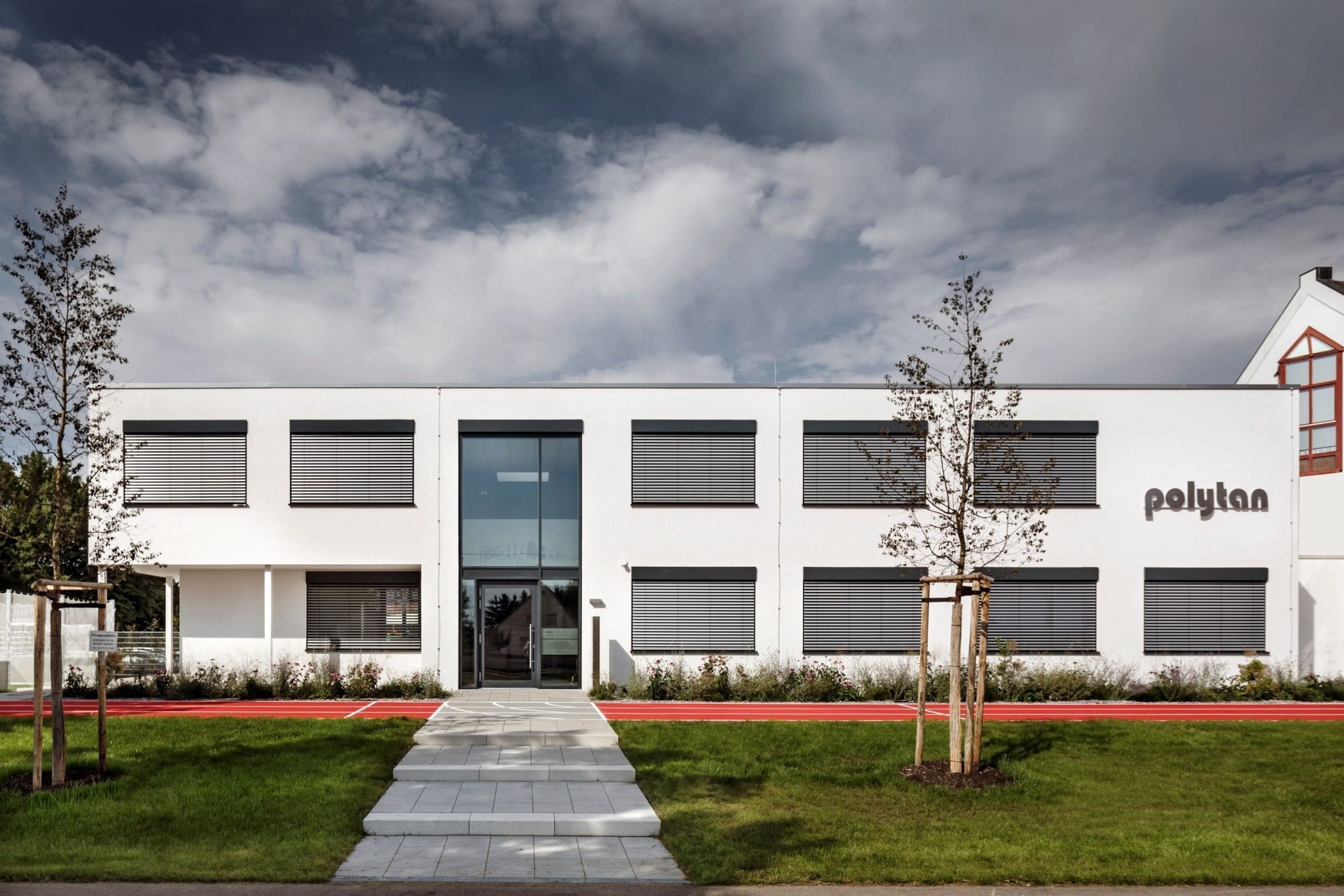 Outdoor sports surfaces made in Germany from Burgheim:

50 years of sports history with Polytan

The history of Polytan began half a century ago with the production of polyurethane-bonded synthetic surfaces by the company Firl + Schretter Sportstättenbau in Neuburg an der Danube. Since then, under the Polytan brand the company has rapidly become one of the world’s leading outdoor synthetic sports flooring manufacturers. In 1974, the company’s headquarters were relocated to Burgheim in southern Germany, and in 2017 a modern extension was added.

It all began with synthetic surfaces – today the Polytan range includes high-speed tracks, all-weather courts, tennis, handball and shock-absorbent surfaces as well as artificial grass systems for football, hockey, rugby and multifunctional playing fields. They are installed worldwide in sports stadiums and club facilities, at school and leisure facilities as well as on public and private playgrounds. They are also used as temporary sports floor systems to enhance numerous indoor and outdoor events such as the legendary ISTAF Indoor athletics meeting in Berlin. The international success of Polytan is based on the sophisticated system structure of its sports floors: The individual components such as the elastic layer, infill granules, surface coating or ‘artificial grass carpet’ are designed and combined differently according to the respective assignment and requirements.

Polytan is part of Sport Group Holding, which also has its headquarters in Burgheim. With the acquisition of the companies STI, EnviroSport, Sportsbygg and TeamSports between 2007 and 2014, as well as AstroTurf in 2016, the group succeeded in further expanding its position on the international market. Today, the group comprises 20 companies from nine countries and employs a total of approximately 1,900 people – around half of them in Germany.

In 1971, the first circular running track was installed at Leopoldstraße in Munich. Since 1995, artificial grass and polyurethane products have been manufactured at the company’s own production facility in Grefrath (NRW).

In 1974, Polytan entered the world of international athletics with synthetic flooring and tartan tracks – this year, the company laid Polytan M synthetic flooring in Vienna’s Prater Stadium (now the Ernst Happel Stadium). In 1978, a race track retopping followed in Karlsruhe’s Wildparkstadion and, in 1987, the first international Polytan race track in Dalian, China. In 2002, another milestone came in the form of the 18th European Athletics Championships, held in Munich’s Olympic Stadium: Here, athletes fought for bronze, silver and gold on Polytan PUR surfacing. Six years later, a prestigious moment for the Burgheim sports flooring specialist came in the form of the 2008 Beijing Olympic Games, when Polytan installed two tartan tracks at the Chaoyang Sports Centre. Over the following years, Polytan equipped numerous other major athletics stadiums for IAAF Diamond League meetings, including the Stockholm Olympic Stadium and the ‘Stade Moulay Abdallah’ in Rabat, Morocco.

Artificial grass by Polytan: On the worldwide road to success

This design revolutionised the use of artificial grass in professional football, as it provides similar playing properties to natural grass and offers sustainable protection against injury for the players. At the same time, Polytan began its own artificial grass production in Grefrath.

An important milestone was participation in the FIFA Quality Programme for Football Turf in 2003 and the first artificial grass pitch with a FIFA Recommended 2 Star certification. Only eight years later, most of Polytan’s football pitches worldwide bear the FIFA-approved quality seal.

Moreover, in 2003 the Red Bull Arena opened in Salzburg, the first football stadium in Europe to hold first-division matches on artificial grass. The contract was awarded to Polytan for the new LigaTurf monofilament, a modern artificial turf system with natural, grass-like playing properties. The subsequent model, the LigaTurf RS+ was introduced in 2008, and continues to set the benchmark for artificial grass systems in professional football thanks to enhanced technical innovations, including its once-unique filament cross section. Other European football stadiums in which national first-division matches were played on Polytan artificial grass quickly followed. These include the Swiss national stadium ‘Stade de Suisse’ in Bern, the Swiss ‘Stade de la Maladière’ in Neuenburg, the French ‘Stade Marcel Pico’ in Nancy and ‘Stade du Moustoir – Yves Allainmat’ in Lorient. In 2015, the first FIFA Women’s World Cup was held entirely on artificial grass. The final took place on 5 July, 2015 at the BC Place Stadium in Vancouver on Polytan’s LigaTurf RS + CoolPlus system.

However, Polytan has not only enjoyed great success in big stadiums over the last 50 years, but also in small stadiums. In 2007, the triumphant era of the popular mini-pitch began. In the wake of the 2006 Football World Cup, the DFB built 1,000 small football fields in Germany in 2008 in collaboration with Polytan, who acted as the planning, construction and execution partner. The aim of the project was to sustainably promote young footballers and school sports, at the same time as encouraging the integration of children with a migrant background. Even today, the popular DFB mini-pitches with circumferential borders and high ball nets are successfully marketed as ‘PolyPlay arenas‘.

In addition to artificial grass systems for football, both rugby and field hockey pitches have become increasingly important for Polytan: In 2012, Polytan became both a licensed ‘Preferred Pitch Producer’ for the World Rugby association and a ‘Preferred Supplier’ for the FIH (Hockey Pro League). Polytan provided artificial grass for the hockey facilities of the 2000 Sydney, 2008 Beijing, 2012 London and 2016 Rio Summer Olympics, as well as the 2018 Hockey World Cup facilities at the Lee Valley Hockey and Tennis Centre in London (women) and in Bhubaneswar in India (men).

The next few years look set to be just as exciting for hockey: For the 2020 Olympic Games in Tokyo and the 2022 Hockey World Cup, Polytan developed an artificial turf which partly consists of renewable raw materials. This sports floor was developed in collaboration with Braskem, the world market leader in organic plastics, and is one of the first products in Polytan’s new Green Technology range Friedemann Söll, Product Management Director: “We are aware of our responsibility to the environment and will continue to enhance the sustainability of our sports floors, step by step.”

Polytan at the Technoseum Mannheim

‘Higher, faster, further’ – modern sports competitions as we know them today are still relatively young. They were first created at the beginning of the 20th century during the Industrial Revolution, thanks to modern technology. This is because it was only with a stopwatch, photoelectric sensors, video analysis, etc., that it became possible to record top sporting performances with millimetre precision to the hundredth of a second. Part of this success comes from highly specialised sports floors made of plastic, which Polytan has been developing, manufacturing and installing for 50 years. The special exhibition ‘FERTIG? LOS! Die Geschichte von Sport & Technik’ [‘READY? GO! The History of Sport and Technology’] at the TECHNOSEUM Mannheim also pays tribute to this contribution to modern sporting history. Four exhibits from the Burgheim sports flooring specialist will be on display there until 10 June, 2019: Artificial grass systems for hockey and football as well as a tennis surface and tartan track.